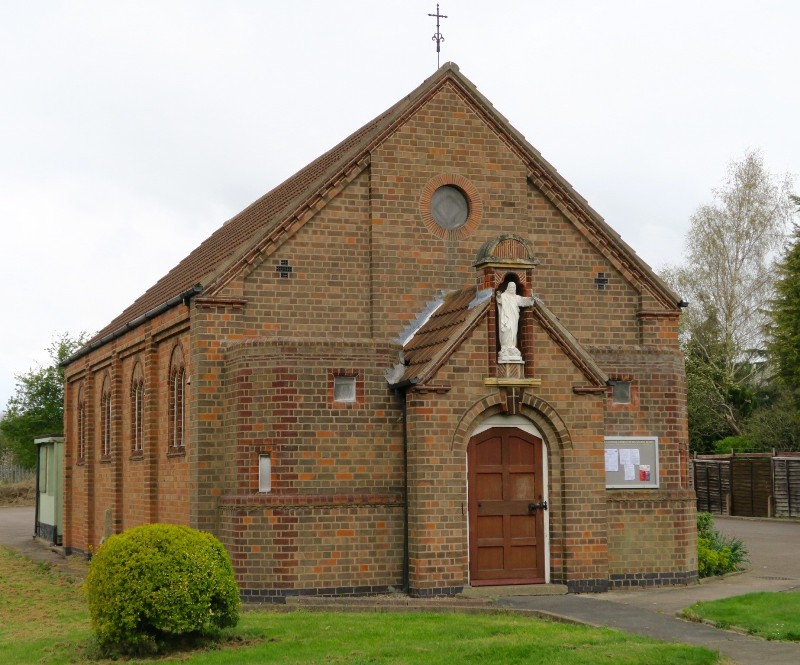 People often ask how long the Church of the Sacred Heart has been in Rothley.  Most of the early details we have were recorded in the diary of P J Martin, one of the first parishioners, who was much involved in the church’s beginnings.  (‘The Catholic Mission of Rothley: The Diary of PJ Martin,’ edited by Terry and Pauline Sheppard.)

The small Catholic community met in April 1922 with Fr John Keating, a priest from Ratcliffe College, to arrange for a Mass to be said on the first Sunday of every month at Enderby House in Howe Lane, the home of Mr and Mrs Martin.   Fund raising was discussed and an altar was to be set up.  In May of 1922, Mass was celebrated for the first time with twenty four adults and young people attending.  Fr Keating read a letter from the Bishop of Nottingham, Dr Dunn, expressing his pleasure at the beginning of the little mission.  A child was also baptised.

At Easter 1924 money was raised to purchase a plot of land in Mountsorrel Lane, Rothley and this is the site on which the church now stands.  The land was fenced by parishioners and in March 1926 they met to discuss the building of a church with a request to the Rosminians to take over the project.  The college accepted and Fr Keating was appointed as the first permanent parish priest.

In March 1927 the building of the church was begun by Bamford of Leicester, after which the Provincial of the Rosminian order and Fr Keating decided to purchase a second plot on the site.  Dr Dunn formally opened the church on the 19th July 1927, with a large congregation of clergy and laity from surrounding districts present.  The church had cost a total of £1350.

In 1929 Fr Keating announced with sadness his move to London, while in August the church was registered for the solemnising of marriage.  Fr. Keating was succeeded by Fr John Guise, who remained as parish Priest until 1935.  Next came Fr John Fevez, who served until 1941, when Fr Denis Horgan was appointed as first parish Priest of St. Theresa’s Church in Birstall and Sacred Heart in Rothley.

From this point Mr Martin’s diary records cease but it is good that he set down for posterity the early history of what is now a thriving Catholic community.  Some older members of the Institute of Charity (the Rosminians) have memories of Fr John Keating and all the Parish Priests who have followed him to the present day, when the church came into the care of Fr Saji Dominic, who undertook repairs and renovation which have resulted in an even more beautiful little church and its accompanying Fr. Keating Hall, keeping the best of the old together with a number of welcome improvements.

The parishioners are indebted to a number of very generous benefactors who contributed greatly to the extensive works which included a complete new floor, a new altar, a much improved heating system, complete redecoration and the purchase, erection and equipping of a social area with excellent facilities, the Fr Keating Hall.  The congregation are also very grateful to the parishioners of St. Theresa’s Church, Birstall, who welcomed them and offered great hospitality during the period when the church could not be used.  The renovation was completed in August 2016 and the church and hall reopened at a Mass celebrated on Tuesday the 6th September by The Right Reverend Patrick McKinney, Bishop of Nottingham.

The faithful people who undertook the task of building a Catholic church in Rothley so long ago would surely give their blessing to what has been achieved.  Their project is in good hands.